This recipe is a new variant of an old family favourite which was originally a lamb tajine which I have modified in various steps into a veggie tajine using fried aubergine to replace lamb. This worked surprisingly well taste-wise and has the additional advantage of dramatically reducing the cost as lamb is quite expensive here. I did try beef for a while which was fine but the veggie version tastes at least as good, is healthier, better for the environment and is cheaper. So there!

Here is my earlier recipe for veggie tajine with afghan/persian rice. I was recently invited to two migrateful online cooking sessions, one Nepalese and the other Ukrainian borscht. Both were great, I learnt a lot and it´s fun to cook with friends who are all over Europe at the same time and then eat together afterwards on Zoom. The Ukrainian one was done by a very dynamic Ukrainian lady who taught us her southern Ukrainian borscht recipe with lots of practical tips and tricks. Borscht has a lot to do with different vegetables being put together in a tasty way and the southern Ukrainian version uses caramelisation of finely cut or grated veggies.

My plan was to do a base tajine and then add various caramelised vegetables with a handful of secret ingredients. The result was great and we´ve been eating a large pot of it for the last two days. I will try to do a quick review of the process as a variant of the last recipe:

Procedure is the same as before. Put tomatoes, water, broth into large pot at the back and warm it up. Slice dates and add with raisins. Skin apples and chop into small cubes and add. Add two teaspoons of honey, a liberal dash of Worcester sauce, maybe some salt and pepper.

Now chop up onions and finely slice garlic and fry with plenty of oil with spices (cumin, curry powder and cinnamon), when glassy add to large pot. Then I skinned and chopped potatoes into small cubes and fried hot also with the above spices until browned then also added to large pot. Carrots were then skinned and grated then fried/caramelised in pan and then added to large pan. I suppose grated parsnips would also be possible, I am toying with the idea of grated beetroot, which can be wonderfully caramelised, but didn´t have any so it will have to wait until time.

We ate with toasted pita bread on first day, then with rice on second and was great with each.

Recipe for veggie tajine with rice 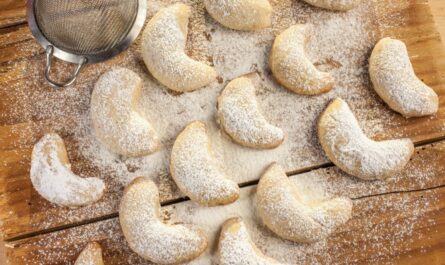 Recipe for Vanilla “Kipferl” without sugar with a mystery ingredient!